Simplifying the Abortion and Same-Sex Marriage Debates (With Flowcharts!)

Political debates consist of highly opinionated individuals screaming at each other and misunderstanding (often deliberately) their opponents' arguments. Nowhere is this phenomenon more evident than during debates over abortion and same-sex marriage.
But these debates are surprisingly simple upon careful reflection. Out of the goodness of my heart (and a desire to protect my sanity from increasingly inane slogans and rhetoric), I am simplifying the abortion and same-sex marriage debates down to their barest essentials.

Regarding abortion: Is the fetus in a woman's womb human life or not?
If yes, then abortion should be outlawed, unless you go the Peter Singer or Mary Elizabeth Williams route and argue that terminating human life is acceptable in certain circumstances.
If no, then abortion should clearly be permitted.
If a fetus becomes a child at some point within the womb, then you permit abortion before it becomes a child, and outlaw it after that point.
Here's a flowchart explaining the abortion debate... 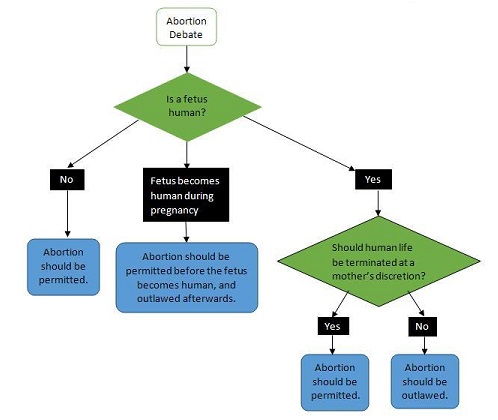 Regarding same-sex marriage: For secular purposes (yes, I know Catholics like me consider marriage a sacrament, but we don't live in a society where Catholicism is the law of the land), is marriage an institution designed to encourage the procreation of children within stable families, or is it a legal contract recognizing the legitimacy of partners in a consensual relationship?
If marriage is a contract granting legal recognition to a consensual relationship, then same-sex marriage (and, for that matter, any consensual relationship) should be permitted by secular authorities.
If marriage is an institution designed to encourage the stable rearing of children, does the gender of the parents matter in the creation and raising of children?
If so, then same-sex marriage should be banned. If not, then same sex marriage should be permitted.
To illustrate this debate, here's a handy flowchart. 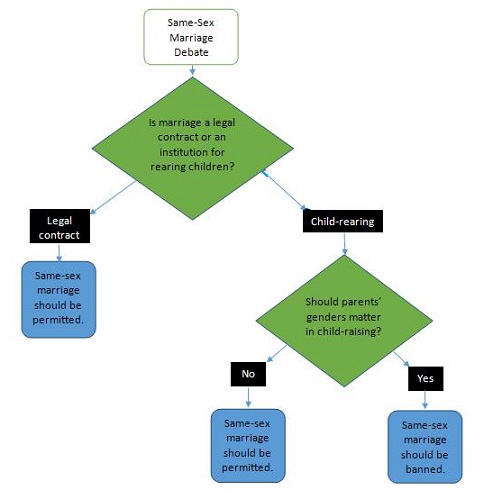 Posted by Lightning Rod at 8:25 AM

Rules for Posting Comments:
1)All commentary is to be respectful.
2)Foul language/crude commentary is prohibited.
3)Use proper punctuation and capitalization.
4)Keep all posts in understandable English.
5)Refrain from personal/ad hominem attacks.
6) Sarcasm, humor, and witty commentary are welcomed.
All posts that violate these rules will be removed.
And the most important rule:
7) All posts are to reflect a spirit of Christian charity.

My Comrades in Faith

This blog would not exist without the support and love of my friends and family. I would especially like to thank: my mother and father for their support and guidance, my siblings for their editorial work and sarcasm, John Killackey for designing Gray Matters, and the Curt Jester for his technical advice and willingness to advise a complete stranger. I cannot thank you enough! God bless you all!

Questions? Comments? E-mail me at catholiclightningrod@gmail.com!